The Coast Guard refuses to admit that CDR Benjamin Strickland became collateral damage in a routine sexual harassment case while acting as Commanding Officer of the USCGC MUNRO.
Is there a War Against Sexual Harassment in the Coast Guard or is there a War Against Officers who do their job?
This is all very puzzling.  The Coast Guard All Hands Blog, the Official Blog Of The Coast Guard Workforce has refused to publish a comment that I submitted on the subject fourty-eight (48) days ago. It has been over a month and the official response is that the comment is pending review.

It was a short straight forward comment. All it said was:
CDR Benjamin Strickland reported a case of sexual assault that was reported to him as Acting Commanding Officer of the USCGC MUNRO and his career was over. He became collateral damage for doing his job. read the Full Story. See http://www.amazon.com/Benjamin-Strickland-Unre…/…/B011B9YLIK

Sexual Assault is a CRIME, not a punch line. 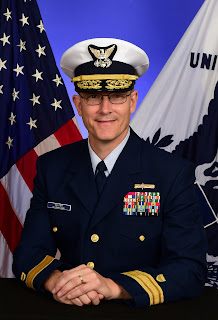 The Blog Post was written by RADM Peter Gautier, Director of Governmental and Public Affairs.

Email ThisBlogThis!Share to TwitterShare to FacebookShare to Pinterest
Labels: GaleForce

The case For CDR Benjamin Strickland

From Wikipedia, the free encyclopedia

Benjamin F. Strickland II, is a retired U.S. Coast Guard Commander (CDR) and whistleblower advocate who alleged illegal retaliation from his Coast Guard Pacific Area chain-of-command in violation of the Military Whistleblower Protection Act in response to his lawfully protected communications.[1]
On May 23, 2013 CDR Strickland was serving as Acting Commanding Officer onboard USCGC Munro (WHEC-724) homeported in Kodiak, Alaska when he made an unrestricted reported regarding a sexual assault alleged to have been committed upon a MUNRO crewmember. CDR Strickland reported the sexual assault allegations immediately to his immediate superior in Command, then VADM Paul Zukunft and requested an investigation by the Coast Guard Investigative Service (CGIS), participated as a witness in the investigations which stemmed from his report, and later expressed his belief of waste, abuse of authority and gross mismanagement by CGIS and senior Coast Guard management officials. After his whistleblowing activity and complaint that CGIS was abusing it's authority and not properly investigating the sexual assault, CDR Strickland became the target of the very investigations which stemmed from his report and was subsequently subjected to multiple acts of retaliation. CDR Strickland was removed from his primary duties, received a derogatory Officer Evaluation Report (OER), and placed in a billet not commensurate with his paygrade as a senior officer.[2] CDR Strickland subsequently filed a whistleblower retaliation complaint with the Department of Homeland Security Office of Inspector General (OIG) which was accepted for investigation.[3]

CDR Strickland was born in 1972 and is a native of Seattle, Washington. He graduated from Maine Maritime Academy in 1995 with a Bachelor’s of Science degree in Nautical Science. He attended the U.S. Naval War College in 2009 graduating with a Masters of Arts degree in National Security and Strategic Studies.[4]He is a graduate of the Maritime Advanced Warfighting School (MAWS) and is a qualified Joint Operational Planner.[5]

Having enlisted in the United States Navy Reserve in 1992, upon graduation from Maine Maritime Academy in 1995 CDR Strickland was honorably discharged to accept a commission as an Ensign and went on to serve three years active duty in the regular Navy. His initial assignment at sea was in USS Hopper (DDG-70) at Pearl Harbor, Hawaii where he completed initial warfare qualifications while serving as Electronic Warfare Officer, and later First Lieutenant.

In 1998, CDR Strickland transferred to the Coast Guard where he was assigned to Marine Safety Office Puget Sound in Seattle, Washington. There he qualified as a Senior Marine Inspector, enforcing US and International maritime regulations and safety standards for foreign and domestic vessels. He also served as the unit Special Interest Vessel (SIV) Officer, supervising the tracking and reporting of high-interest shipping for national intelligence agencies. In 2000 he returned to sea duty as Weapons Officer in USCGC Sherman (WHEC-720) at Alameda, California, completing patrols in the Bering Sea and Eastern Pacific. SHERMAN also deployed to the Arabian Gulf, serving as Surface Action Group (SAG) Commander for Middle East Force 01-1 and Maritime Interdiction Operations Coordinator (XJ) for the HARRY S. TRUMAN Battlegroup. In theatre as a Tactical Action Officer (TAO), CDR Strickland coordinated maritime enforcement of UN sanctions against Iraq and air surveillance operations in support of Operation SOUTHERN WATCH. Upon OUTCHOP from FIFTH Fleet, SHERMAN transited home to Alameda via circumnavigation of the world.
In 2002, CDR Strickland was assigned as Coast Guard Liaison Officer at Afloat Training Group Pacific Northwest in Everett, Washington. There he qualified as an Afloat Training Specialist, managing the training, assessment and certification for three different classes of cutters as the Pacific Area Commander’s direct representative. From 2004 to 2006, he served as Operations Officer in USCGC Midgett (WHEC-726) at Seattle, Washington, coordinating Homeland Security, Search and Rescue, Fisheries and Counter-Drug missions throughout the Pacific in support of Operations NOBLE EAGLE, ARCTIC SAFEGUARD, BERING SHIELD and CAPER FOCUS. CDR Strickland commanded USCGC Roanoke Island (WPB-1346) (WPB-1346) at Homer, Alaska from 2006 to 2008[6] before attending the College of Command and Staff and Maritime Advanced Warfighting School at Naval War College in Newport, Rhode Island. CDR Strickland then performed a three month operational warfare assignment comprising contingency, adaptive and collaborative planning in the development of a formal Concept Plan (CONPLAN) for U.S. Naval Forces Central Command and Operation ENDURING FREEDOM.
From 2009 to 2011, he was assigned as a Strategic Planner in the Office of Defense Operations (CG-532) at Coast Guard Headquarters in Washington, DC where he executed responsibility for Coast Guard input into National Defense strategy documents, plans and policy, coordination of service chief-level staff talks, resourcing of Joint Staff global force management requests, and also served as the Desk Officer for all U.S. European Command and U.S. Africa Command issues. CDR Strickland returned to sea as Operations Officer in USCGC Stratton (WMSL-752) at Alameda, California from July 2011 to June 2012 before assuming duties as Executive Officer in USCGC Munro (WHEC-724)) in July 2012.[7] In 2014 he was reassigned to Coast Guard Headquarters as the Support Division Chief in the Office of Counterterrorism and Defense Operations (CG-ODO-3). He retired from active duty in 2015.[8]

In July 2015, CDR Strickland accepted a position at the Maritime Administration as a National Security Specialist.