Fifty Years after the Coast Guard Academy graduated its first African-American cadet, the Class of 2018 boasts the largest number of Black Graduates. In 1966 there was one, Ensign Merle James Smith, Junior from Baltimore, Maryland. In 2018 there are eighteen, among them Ensign Karida Harris, also from Baltimore, Maryland,shown below shaking the hand of Vice President Mike Pence, the Graduation Speaker. 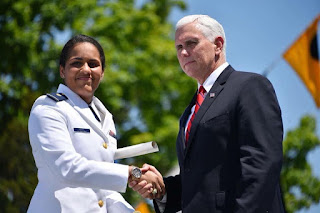 Below, Coast Guard Commandant, Admiral Paul Zukunft, stands proudly in the middle of this Black Tidal Wave of Ensigns. 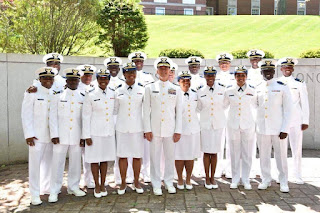 As I observe and ponder this new phenomenon in Coast Guard and American History, I am left with some soul searching questions. I have a right to ask these questions because I dedicated a major portion of my Coast Guard Career to recruiting Black high school students for the Coast Guard Academy.

My first emotions are Joy, Happiness, and Pride. God is good, and He works in wondrous, even mysterious ways. In 1964 when I entered the Coast Guard Academy, I never would have dreamed that this day would ever come. We find ourselves on the threshold of a New Era in Coast Guard History. In 50 years I have seen the Coast Guard go from the horse and buggy phase to inter-planetary phase of travel in the area of Equal Opportunity, particularly where America's Citizens of Color are concerned.

The events of this past week have left me all warm and fuzzy about my Alma Mater. However, after seven Decades of living in America, and the last eight years of Fundamental Change under the previous Administration, I am hesitant to pop the champagne corks, just yet. The decades come and go, and the Ebb and Flow of History does not always take us where we think we are heading. The President who was supposed to stop the rise of the Oceans and bring us all together as a Nation of Americans, has left us more divided than at any time in my life. I spent my first 21 years under a System of Jim Crow Segregation where we acquiesced to a Political System called Separate But Equal.

When the Supreme Court told us that "Separate" was inherently "Unequal", we looked to a day when America would be fully "integrated" into a Color-blind Society. We thought and prayed that Obama would be the final link in that chain. Unfortunately, we were wrong. Honest and objective critical thinkers today see that we were all hood-winked. I saw men and women, some of my high school classmates killed fighting for equal rights and full integration in the 1960s. Our Society was working towards Full Integration, not just De-segregation. But today, Black students at Harvard University are demanding a return to "Separate But Equal". How the worm turns! 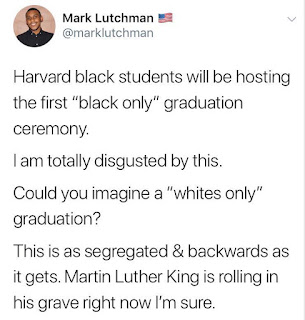 This trend disturbs me very much. Obama was a Harvard Graduate. Many of our National Leaders are Harvard Alumni. I do not agree with most of their Liberal Leftist Policies and Opinions, but they impact all Americans. I accept the results of fair National Elections. We suffered under Obama and his twisted appointees for eight years. And I see what it has brought us; more divided that united, clamoring for separation rather than integration, separating into splinter group constituencies, and taking a giant step backwards in the area of Human Relation, American Style.

So, what does this mean for the Coast Guard Academy Class of 2018, and this constant pigeon-holing of Coast Guard Officers? They were separate social and culture groups in 2014 when they entered the Academy. Their four years of training was designed to tear down barriers and to turn them into a unified Corps of Coast Guard Officers. They were to think alike, act alike, and be alike; they were to do everything except look alike, which is not possible. America wanted Coast Guard Officers, not Balkanized marine specialists with allegiances to separate groups in our Society. This constant separation into various superficial groups for statistical purposes does not bring us together as an American Society. It works against the idea of "E pluribus Unum".

When will these Graduates cease to be Black Coast Guard Officers or African-American Officers, and become simply Coast Guard Officers or just Officers?
Starting at Swab Summer we strive to eliminate distinctions between the cadets. We try to put them through a four year cookie cutter training program that turns out exact replicas. I may be overstating it a bit, but that is the intention.

If all the other graduates are plainly and simply Coast Guard Officers, why must we consider these to be Black Officers or African-American Officers? We still hover in the shadow of “Separate But Equal”, knowing that Separate is inherently Unequal. Fifty years after Merle Smith graduated, Black Officers are still considered a separate and distinct specie.

I fear that not many will see my point. It is very subtle, and it takes old age and a lifetime of experiences as a Black Man in majority white America and a retired Coast Guard officer to perceive the distinction.  Also, a lot of world travel and exposure to other cultures and societies have helped to mold my opinion.

I understand the need to be recognized, to be accepted into a group, and to be held in high esteem by your peers. I understand the need for keeping statistics and the desire to get credit for jobs well-done.
For example consider Abraham Maslow's hierarchy of human needs. It is a theory in psychology proposed by  Maslow in his 1943 paper “A Theory of Human Motivation” in Psychological Review. Maslow subsequently extended the idea to include his observations of humans' innate curiosity.
Maslow's hierarchy of needs is a motivational theory in psychology comprising a five-tier model of human needs, often depicted as hierarchical levels within a pyramid. Maslow stated that people are motivated to achieve certain needs and that some needs take precedence over others. Humans need food, sleep, safety, love, and purpose.

We humans need to feel a sense of belonging and acceptance among social groups, regardless whether these groups are large or small. For example, some large social groups may include clubs, co-workers, religious groups, professional organizations, sports teams, gangs, and online communities. Some examples of small social connections include family members, intimate partners, mentors, colleagues, and confidants. Humans need to love and be loved – both sexually and non-sexually – by others.

Esteem needs are ego needs or status needs develop a concern with getting recognition, status, importance, and respect from others. All humans have a need to feel respected; this includes the need to have self-esteem and self-respect. Esteem presents the typical human desire to be accepted and valued by others. People often engage in a profession or hobby to gain recognition. These activities give the person a sense of contribution or value. Low self-esteem or an inferiority complex may result from imbalances during this level in the hierarchy. People with low self-esteem often need respect from others; they may feel the need to seek fame or glory. However, fame or glory will not help the person to build their self-esteem until they accept who they are internally.
How does one explain the need for the National Bar Association, NBA, when there is an American Bar Association, ABA? Perhaps they would not allow Black Attorney members or they would not recognize Black achievement.

Why do we need a Black History Month, if American History is taught in school? (Assuming it is taught, AND the historians consider Black citizens to be Americans.)
What is the usefulness of praise or honor that you have to buy? If you have to write your own news stories to praise yourself, it is the same as recommending yourself for a medal , and writing the citation. It is fake, false, worthless. It is akin to the difference between making love to your wife versus paying a Hooker for commercial sex. The emotional content is different. One has meaning, soul satisfaction; while, the other merely scratches an itch.

The American Dream is to become an American, not an American version of what we were. When America first allowed Immigrants to come to America, Immigrants forbade their children to learn the language of the Old Country; instead they were forced to learn American/English.
Assimilation is the American ideal, the Dream. When Black high school graduates assimilate into the USCG Officer Corps, when they join the Long Blue Line, they become Coast Guard Officers, not Black Officers or African-American Officers. Separate But Equal is not full Integration. It is only De-Segregation.
These officers are “stigmatized “ at birth; that is to say, at graduation. The men and women out in the Field of the Coast Guard are being told these officers are different. Black Officers need to be Assimilated, not separated. Taking them aside and photographing them is almost like a "Perp Walk".


They should hang around with the other Officers, and the chiefs. I know Birds of a feather, flock together. But, a bird does not cease to be a bird if he spends some time with Lions, or Elephants or even Snakes. He already knows how to fly. Other birds cannot teach him anything he doesn’t already know. But a Lion could teach him how to have heart and be a King. An Elephant could help him improve his memory. Hanging around snakes could teach him subtlety and other socially unacceptable traits that would serve him well when evil doers seek to take advantage of him. My advice to the Class of 2018 is to be as wise a Serpents, but as harmlessly Doves.

This type of mind control and discipline is not much different from what a Judge must do when he puts on his Black Robe. He must shed his biases, prejudices, and other human foibles. While he is on the Bench he must pretend to be a god, and act totally objectively. Hypothetically, a Black Panther Judge should be able to fairly Judge the Case Of even a KKK Wizard.